We don't know what he would look like now
What achievements would have come
But we keep him alive in our hearts
Our imaginary son
Posted by YetAnotherMumBlog at 14:01 5 comments:

A few months ago I was asked if I would be interested in filming a video about Charlie for the Keep Watching campaign. Of course I said yes and this is the result....


It is really important that as many people see this video as possible to raise awareness of the signs of meningitis. Please share this link in as many places as you can. Thank you.
Posted by YetAnotherMumBlog at 08:23 3 comments:

It's been two years since I last updated and as tomorrow is the third anniversary of Charlie's death I thought I would make a new post. For the most part we are doing very well, life moves on although things are very different. Charlie now has a little sister Emily and she and James are little rays of sunshine for us. They are adorable and bonkers in equal measures! Charlie is a constant presence in our lives. We talk about him daily, his pictures are up around the house and James always includes him on drawings of his family at school. My poor children are subjected to kisses and cuddles every few minutes as i'm so grateful to have them with me.

We've now raised over £25,000, in fact a successful fundraiser on Friday means we're around £26,000. It all goes to the newly merged meningitis charity Meningitis Now. £26,000 can help an awful lot of people cope with life after meningitis. We've been very busy with the awareness side too. In the past few weeks Charlie's story has been in Woman's Own and I was filmed for the "Keep Watching" campaign which will be coming out shortly.

We took the kids to Charlie's grave for the first time today. James took it in his usual stride and asked if Charlie had any more graves we could go and visit, oh and could we come back next week with some toys for him?? Emily was more interested in the cat ornament placed on his grave. She spend the whole journey home saying "bye bye Charlie" which was very cute.

I find the anniversary of his death the hardest time of year, even worse than his birthday. I relive every moment the week before and it doesn't seem to get any better as the years go on. Three years has been a blink of an eye and yet an eternity since i last cuddled my baby boy. The fight goes on and we have no plans to stop our campaign. I never know what i'm going to be asked to do next and but i always say yes with Charlie whispering in my ear.
Posted by YetAnotherMumBlog at 12:26 5 comments:

It’s been a year today since Charlie died. It’s so much easier to write positive, upbeat updates but to write about what the last year has been like for us is really difficult. Grief is such a long process and i don’t think you can ever get over losing a child. People tell me in time I’ll learn to live with it.
I really can’t believe it’s been a year already, it feels like time has stood still. I still wake up and think it must be a horrible dream, every morning I look for Charlie next to me in bed and then it hits me all over again. I still can’t believe it actually happened to us. It’s something you read about in a magazine and think what an awful thing to happen to someone but this time it was us and that awful story is our reality.
To end on a positive note with the help of our family and friends we have raised over £14,000 this year for the Meningitis Trust and another £1,000 for Alder Hey Intensive Care. We have had over 173,000 hits to the blog and almost 400 celebs retweeted for us. At the height of our Twitter campaign we were in the top 3% most influential Twitter accounts. I even got to meet royalty! Not bad for a year’s work :)
Posted by YetAnotherMumBlog at 01:57 1 comment:

Last week i helped launch the Meningitis Trust App for Android phones by writing a letter to the Editor which was sent to every newspaper in the country. I am urging parents to download the app so they have the signs and symptoms at a touch of button. Download the app by clicking on the following link (they also do an iPhone one) http://www.meningitis-trust.org/meningitis-info/signs-and-symptoms/iphone-application/ and you can read my letter here http://www.meningitis-trust.org/katy-manns-letter-to-all/
Posted by YetAnotherMumBlog at 10:35 5 comments:

Happy 1st birthday to our wonderful little Charlie. I just don't have any other words than that today.
Posted by YetAnotherMumBlog at 03:08 6 comments:

It’s been six months today since Charlie died. The longest six months of my life. I don’t think it’s even possible to describe what the last six months have been like for us but for every bad day we’ve had something wonderful and unexpected has happened. If you’d have told me the day Charlie died what we would have done in six months I would never have believed you. Over 131,000 people have read Charlie’s story and we have raised around £9,000 with more money still to come in and more fundraisers planned.

We strongly believe that Charlie is still around us and we’ve had so many positive experiences this year we know he’s a very busy boy. He’ll always be a big part of our family and we talk about him all the time. I think sometimes people are scared to mention his name to me in case it’s a painful reminder but there isn’t a second goes by that I don’t think about him. He’s one of my favourite topics of conversations and I love it when people talk about him, I know people haven’t forgotten him then. The 15 weeks he was with us was one of the happiest times of my life and they are happy memories not painful ones.

We’ve had some really good support from our family and friends and even now six months later I still get cards in the post from friends to let me know they haven’t forgotten. Yesterday a package arrived from a friend with some sky lanterns and we’re going to send them up to Charlie this evening. As always we are celebrating Charlie’s life today not mourning it. Charlie’s life had a purpose and he came to us so we would do the work we’ve done after his death. He came here to save others and we are so incredibly proud of him.

Posted by YetAnotherMumBlog at 04:18 7 comments:

In the early hours of this morning we reached 100,000 hits! We just can't believe how far it's come. When i first wrote it i thought maybe a few of my friends would read it but within 24 hours of posting it on Facebook it had 6,000 hits. We thought that was incredible but would never have believed that less than four months later we would hit 100,000! 300 celebrities have retweeted it and the total of their combined followers is over 37 million.

It seems fitting that we reached this milestone today. A year ago today i had my 20 week scan and we found out we having a healthy baby boy. We went shopping afterwards and bought his first few outfits, James chose a dinosaur vest for him. We were going to keep the sex of the baby a secret until he was born but James came home and told his Grandma that we'd bought some blue clothes so that lasted all of a day! We went out for a meal that evening and pretty much decided then that he was called Charlie. His middle name took a bit more negotiating ;)

So a year later and 100,000 people have read Charlie's story. Sadly it doesn't bring our baby back but it's a lovely way to remember and honour him. Thank you to everyone who has helped us with our campaign.
Posted by YetAnotherMumBlog at 01:40 2 comments:

Unfortunately my expressing has come to an abrupt end. I woke up yesterday morning unable to breathe. We went to hospital where i was diagnosed with a chest infection and given antibiotics for a week. With a normal breastfeeding relationship you can still breastfeed whilst taking antibiotics but you can't when it goes to premature babies. My milk supply dropped quite considerably a couple of weeks ago (entirely my own fault, i missed a pumping session one evening and it dropped from that) but i was still determined to carry on. Unfortunately it wasn't meant to be and although i hadn't known it at the time Christmas Eve was my last day of pumping. I'm really sad not to have reached my goals but i have managed to donate around 780 ounces which i'm delighted about.

I really hope that it has encouraged people to persevere with breastfeeding. If i can make it to 5.5 months without having a baby for 2 of those months then i hope it has inspired just one person to keep going.
Posted by YetAnotherMumBlog at 05:06 19 comments:

Just in case you wanted to see what 300 ounces of milk looks like...this was my freezer before my milk was collected yesterday... 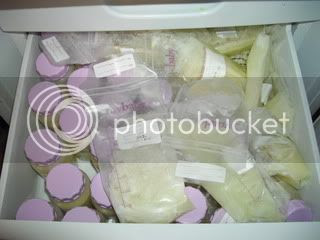 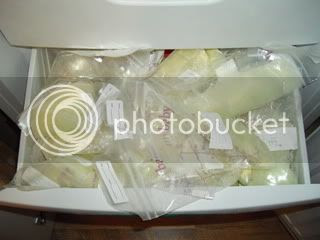 Posted by YetAnotherMumBlog at 05:55 5 comments:

As i write this we've had 5738 hits to the blog from countries all over the world - US, Canada, Australia, New Zealand, Ireland, France, Germany, Poland, Norway, Finland, Hong Kong, Bahrain, Saudi Arabia and United Arab Emirates. I'm sure i've missed some too. I'm completely overwhelmed by how many people have read my baby's story. It's amazing and i'm so thankful people have shared this blog with their friends. The more awareness we can raise the better.

I'd like to say a huge thank you to those that have donated to Charlie's Meningitis Tribute Fund. The generosity of people, some who have never met us, is incredible. The money goes to a very worthy cause and we're trying to raise as much money as possible for them. We have also donated £550 to Alder Hey hospital's Parachute Fund which is for their Intensive Care Unit.

I also want to raise awareness of using milk banks for donating breastmilk. Anyone can donate their milk subject to a blood test and answering some simple health questions. There is a link on the right to the UK Milk Bank which gives more information. The milk donated goes to premature babies in Special Care. My goal is to donate at least 1000 ounces of milk and i've donated just over 400 ounces so far.

Thank you for reading Charlie's blog.
Posted by YetAnotherMumBlog at 01:15 2 comments:

Click here to donate to Charlie's Fund for the Meningitis Trust